John Georges talks about his purchase of The Advocate 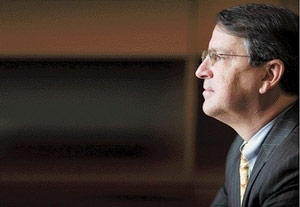 The Advocate, which moved into the New Orleans market from Baton Rouge earlier this year in response to The Times-Picayune going to a three-day-per-week production schedule, has been sold to New Orleans businessman and sometime-political candidate John Georges. The announcement of the “Georges Media Group” and its buy will be announced officially on Wednesday at a 10 a.m. press conference at The Advocate’s Bluebonnet Road offices, which will be attended by Gov. Bobby Jindal and various politicos and dignitaries.

In an interview tonight, Georges said he would be getting his first look at the physical paper when he walks through the newsroom and plant tomorrow. “I’ve wanted to buy The Advocate for two years now,” he said, adding that the deal was finalized just today.

Georges had signed a letter of intent in March to buy the paper from the Manship family, which had owned it for 100 years. Publisher David Manship, who had been publicly ambivalent about the family’s sale, sent an email to employees tonight saying, “I can tell you personally I am happy that such a passionate and reputable Louisiana family is taking the helm.”